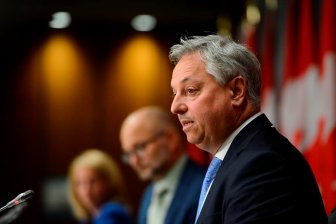 Julie Payette resigned from her role as governor general more than two months ago following a scathing review into allegations of workplace bullying, but there is still no clarity on whether taxpayers will be paying for expenses she may incur going forward.

While the process is now underway to find her replacement, it appears the government has yet to resolve whether Payette should get the taxpayer-funded expense account traditionally granted to former governors general. She also gets a lifelong annuity worth roughly $150,000.

Global News asked the Privy Council Office, which is in charge of the administration of the expense program, for an update on whether there has been a decision regarding Payette, as well as whether she has yet attempted to claim any expenses and whether any have been reimbursed to her.

“Work continues to determine how best to ensure that the program continues to function in an effective manner,” said PCO spokesperson Béatrice Fénelon in an email.

Additional requests for more detail, including specifically whether Payette has claimed or been reimbursed yet for any expenses, have not been answered.

READ MORE: The rise and fall of Julie Payette — from a ‘great adventure’ to resignation

Payette’s resignation came on the heels of a high-profile review into allegations of a “toxic” workplace at Rideau Hall, which sources told Global News painted a “scathing” portrait of the Queen’s representative.

Former governors general, along with their spouses, traditionally get access to an expense account that allows them to claim up to $206,000 each year.

Eligible expenses include setting up and maintaining office space, staff and equipment, as well as costs incurred while carrying out activities related to their former role. The authorization also allows for former governors general to get reimbursed for “the payment of travel expenses of the former Governor General, his spouse and/or members of his office who need to accompany him insofar as such expenses fall within the terms of reference of the policy.”

The program has existed since 1979 and has come under scrutiny in the past, though never as much as has emerged in recent months given the findings of the report into the allegations against Payette.

But no governor general has ever resigned under a cloud of scandal as Payette did — resignations in the past have been extremely rare and only in the event of deteriorating health.

Those expenses are not required to be made public, unlike expenses for senators and members of Parliament who are required to report a wide range of expenses incurred on the taxpayer dime, including travel expenses by themselves and their families, office expenses, and housing expenses.

David Johnston is the only former governor general to publish his expenses voluntarily.

Prime Minister Justin Trudeau has said little on whether Payette will get access to the expense account.

“This country has very clear rules and regulations and processes and procedures in place to follow in these cases of reporting expenses or indeed on annuities for governor generals,” Trudeau said when questioned on the expenses back in January.

“Those processes will be followed but obviously we’re always open to having discussions on changes that need to be made moving forward.”

Dominic LeBlanc, president of the Queen’s Privy Council, told Global News in January that the expense program was under review.

“We think Canadians expect a high degree of transparency and rigour with respect to any of these benefits,” LeBlanc said.

“So the Treasury Board will continue to look at what’s appropriate, but the retirement allowance is prescribed by law and that’s exactly what she’ll receive.”

A spokesperson for LeBlanc said they did not have anything to add to the response offered by PCO when contacted by Global News for this story.

1:07Trudeau mum on whether Payette will keep expense account

Trudeau mum on whether Payette will keep expense account – Jan 22, 2021